Arriving from Ischia at the ferry port of Naples, I went to the apartment where I had lived for a week before leaving for Ischia. The train to Rome was still a couple of hours away, and I had arranged with the hostess to leave my backpack for that time. Although the hospitable Tatiana gave me a separate room with the opportunity to rest before the road, I went for a run through the market located nearby, at the gate of Nolan (on the map). 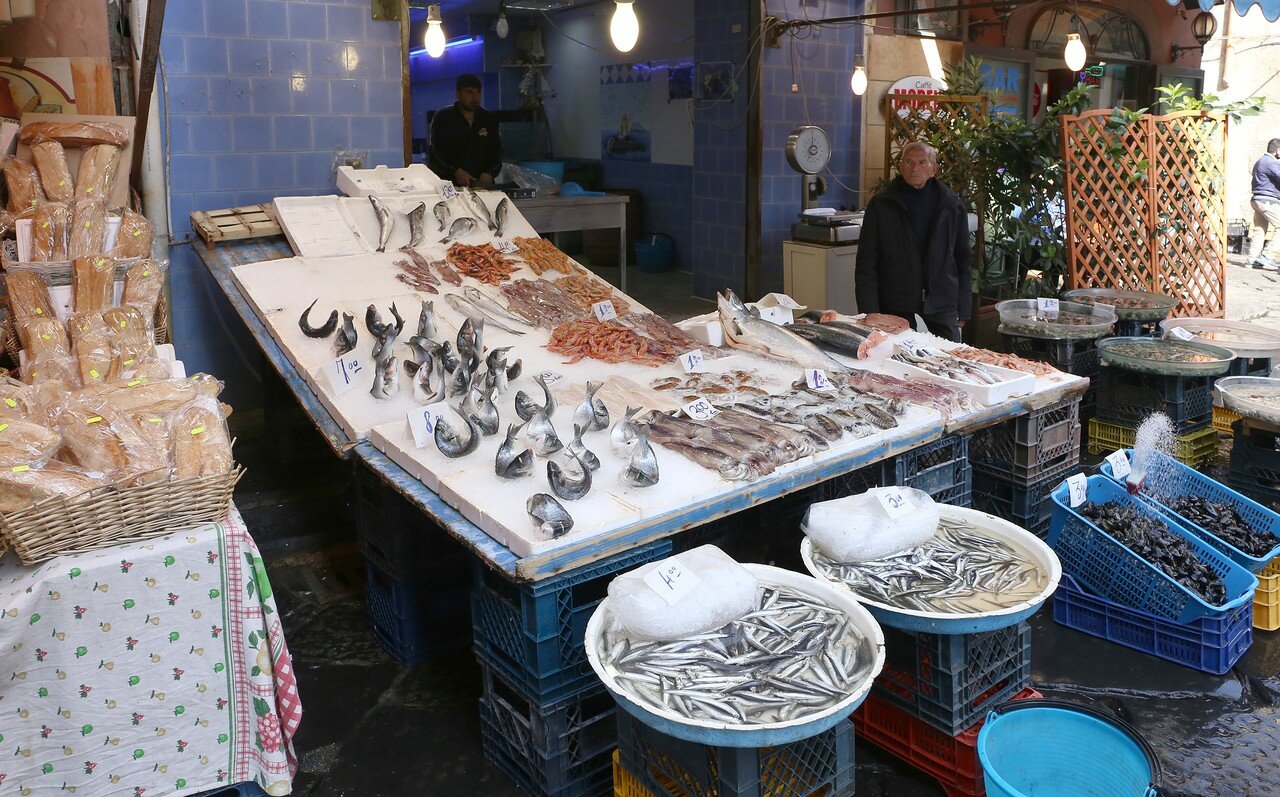 After a week of living in Naples, I never got to know this colorful place, running through it early in the morning, when the merchants were just beginning to open their stalls, and returning already in the dark. Today, moreover, was Sunday, "market day." 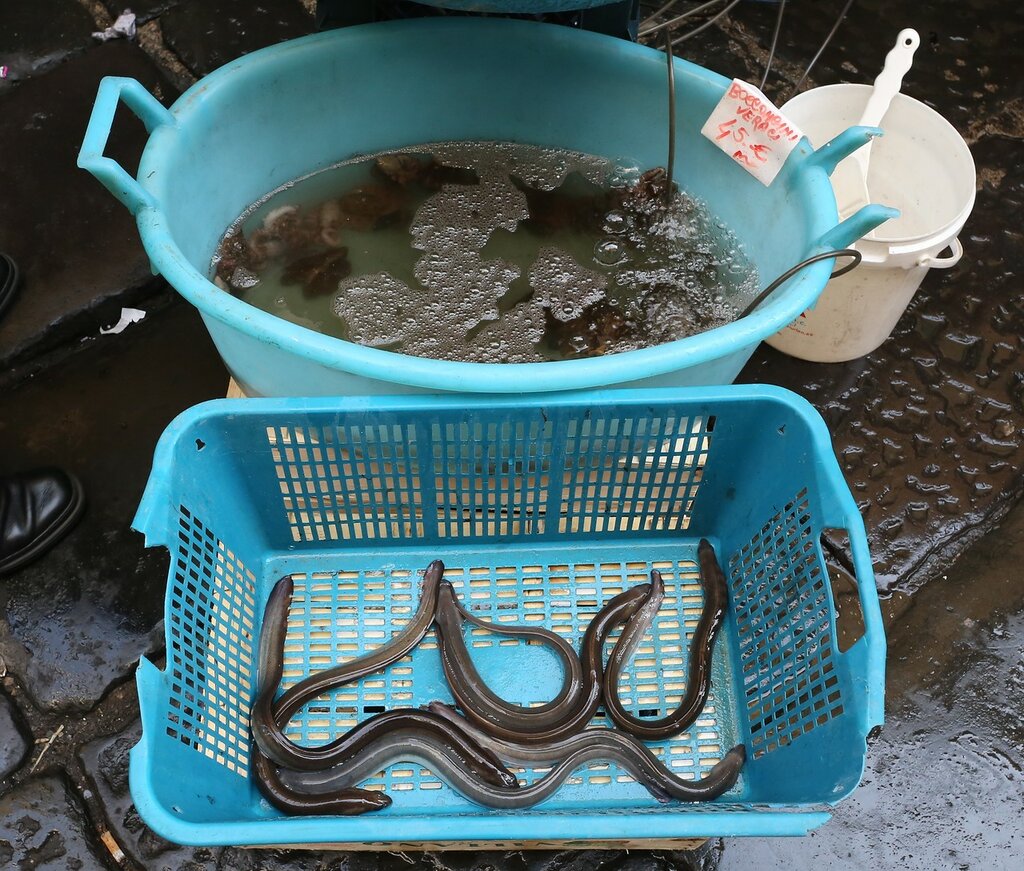 On Via Sopramuro, which is just outside the gate, there is a trade in gifts of the sea, brought here directly from the port - the morning catch of local fishermen. 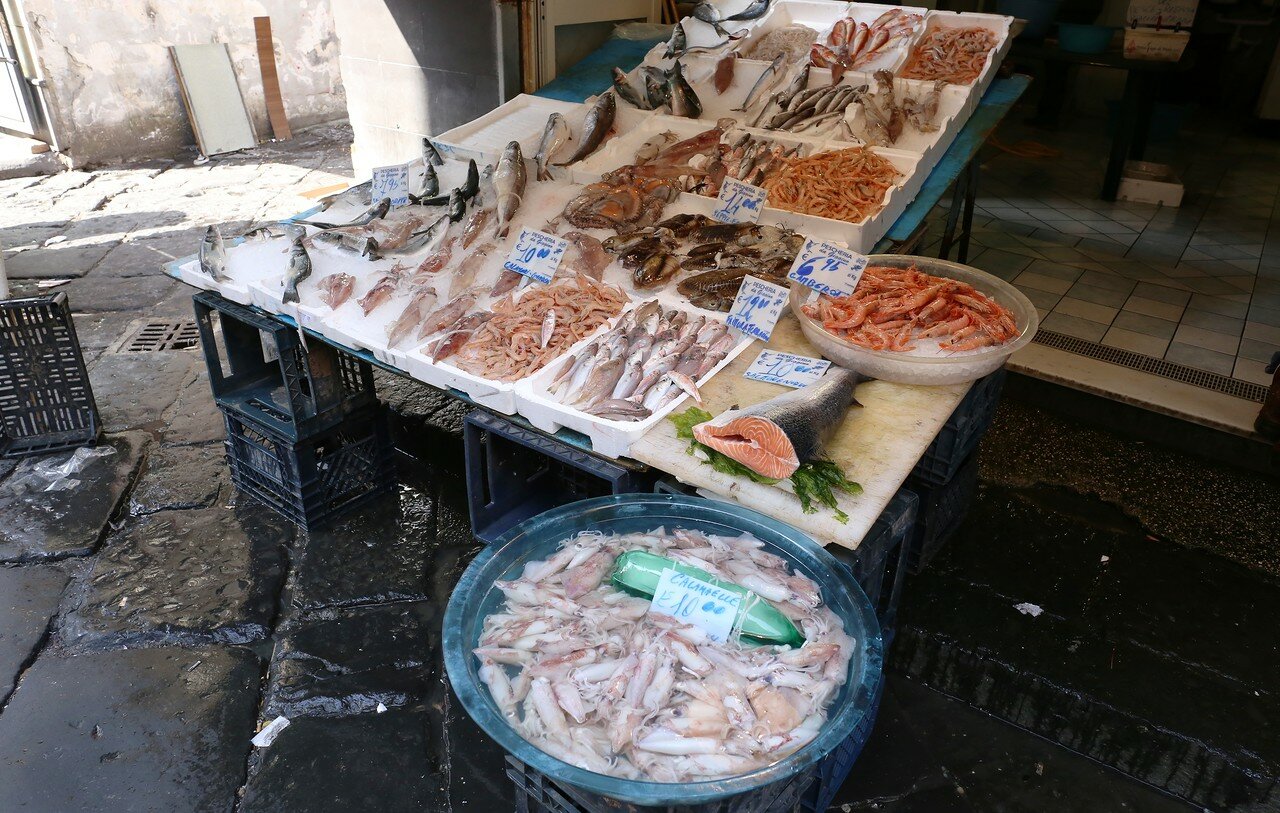 From the mass of names-acicidi sauri cefaci cozze luvari cacamari orate lacerti, I understood only sarde. Prices for fish have a wide spread - from 1 to 10 euros per kilogram. 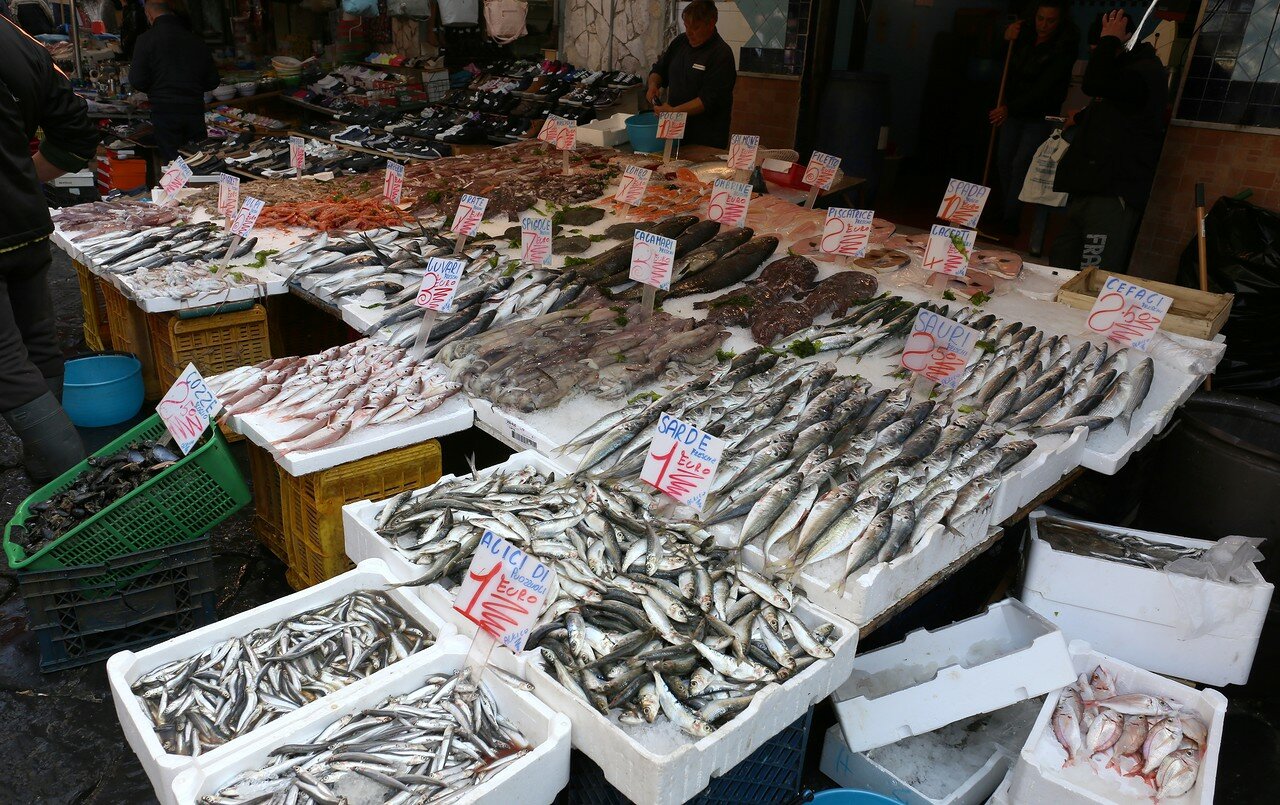 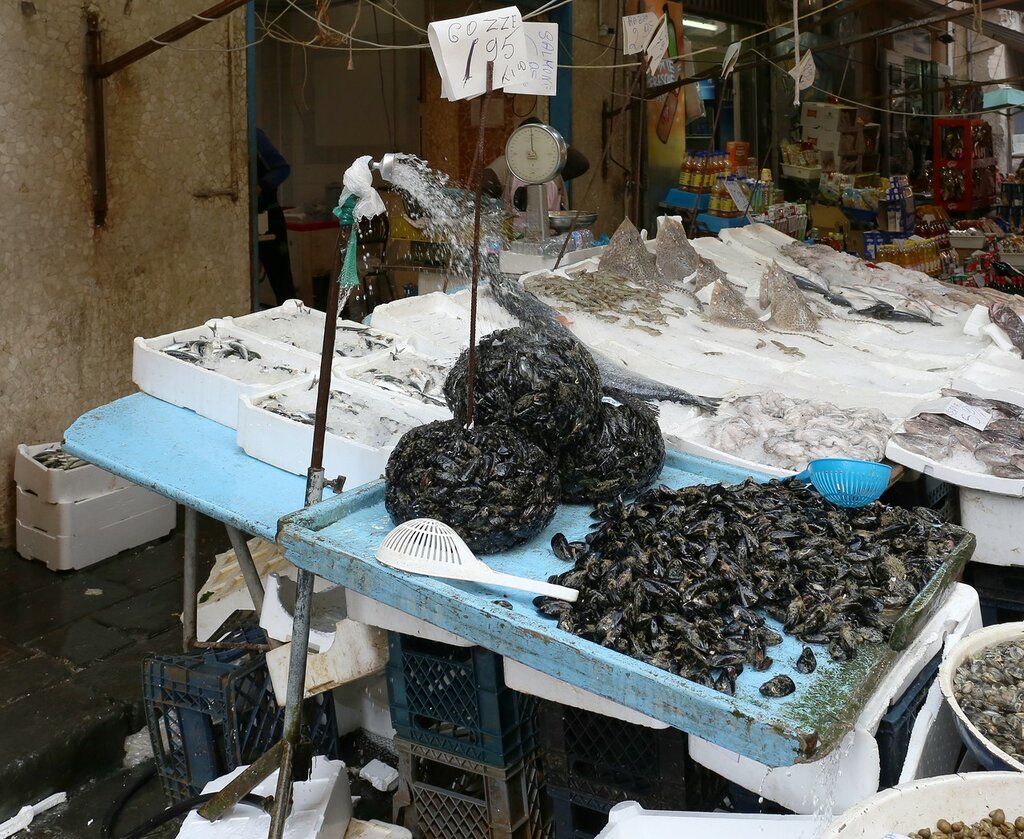 It says Serpie, but it doesn't look like a serpie fish at all. 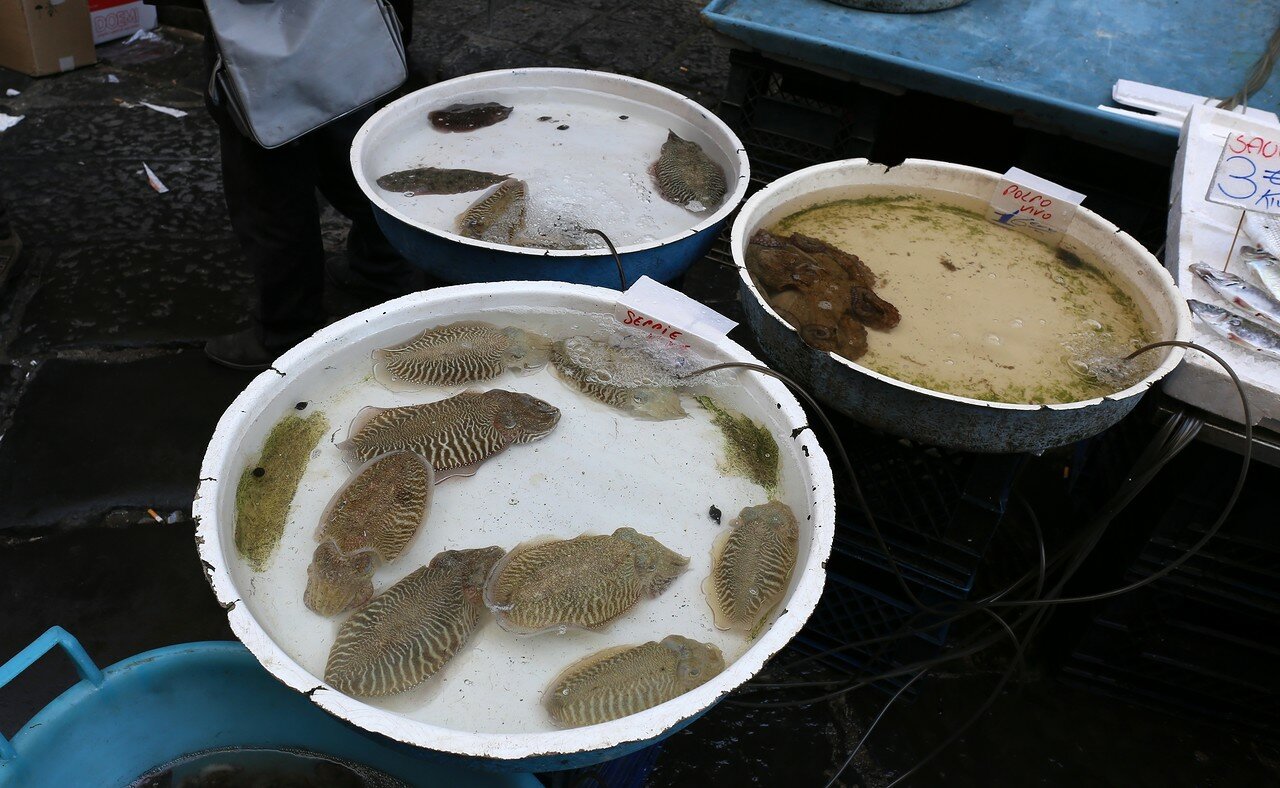 A huge selection of clam shells of all sizes and colors. 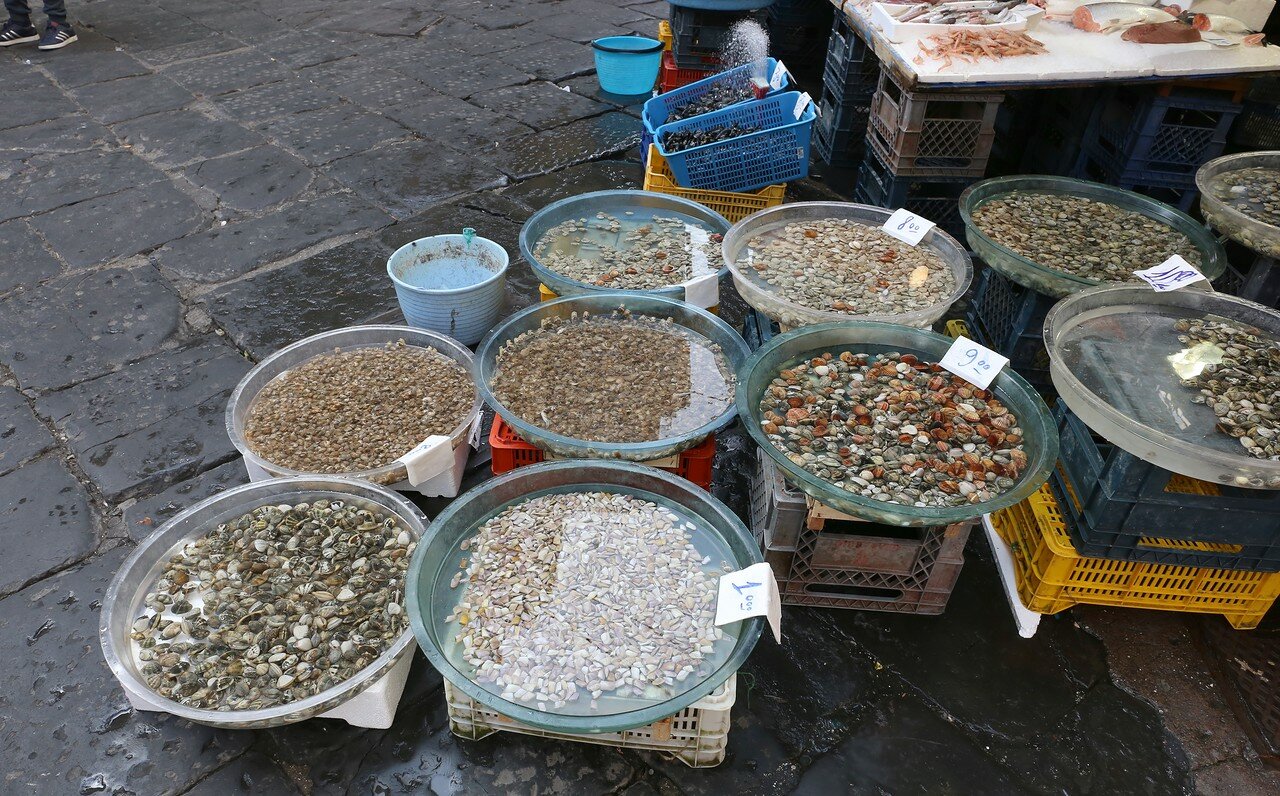 The product advertises by voice - here and there you can hear loud shouts-Prego! prego! 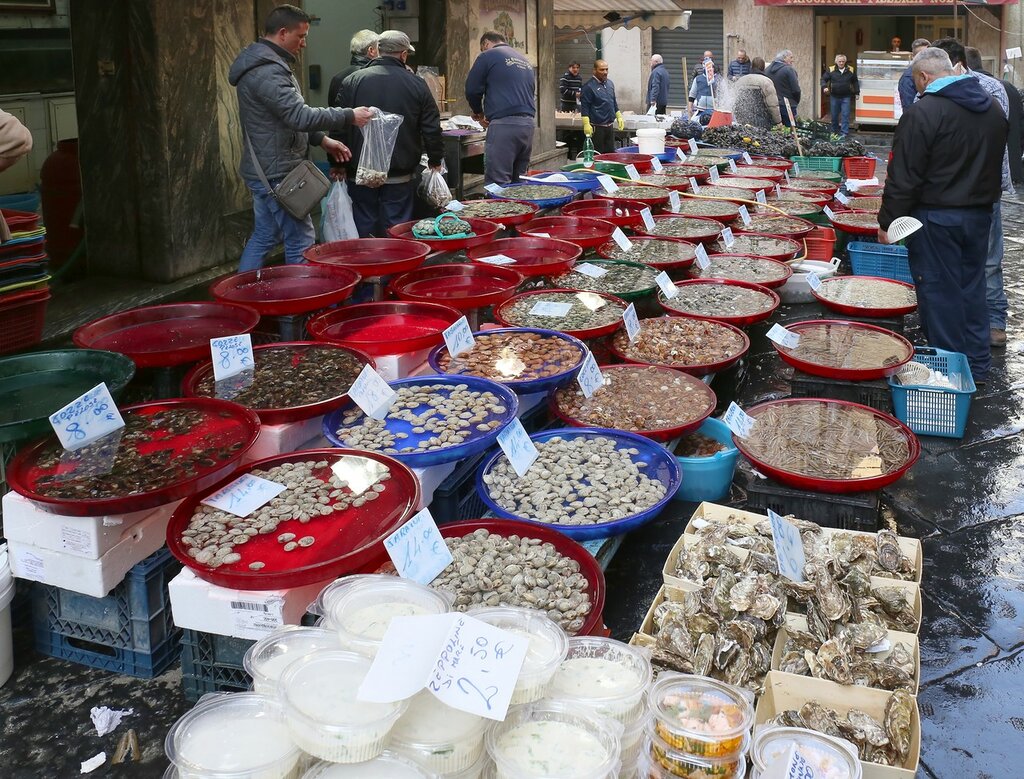 Agricultural products delight the eye with their juicy freshness and attractive prices. 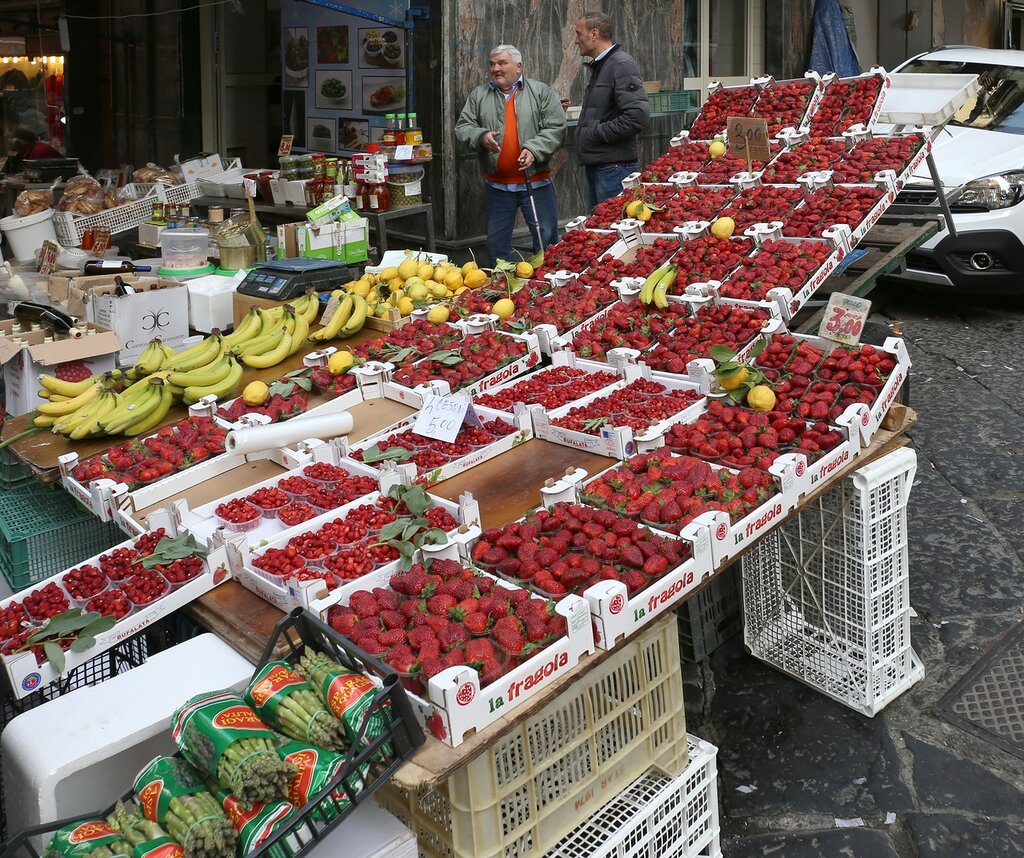 Prices are noticeably lower even than in budget supermarkets, despite the assurances of "experts in Italy" at various travel portals that there "everything is more expensive in the markets". 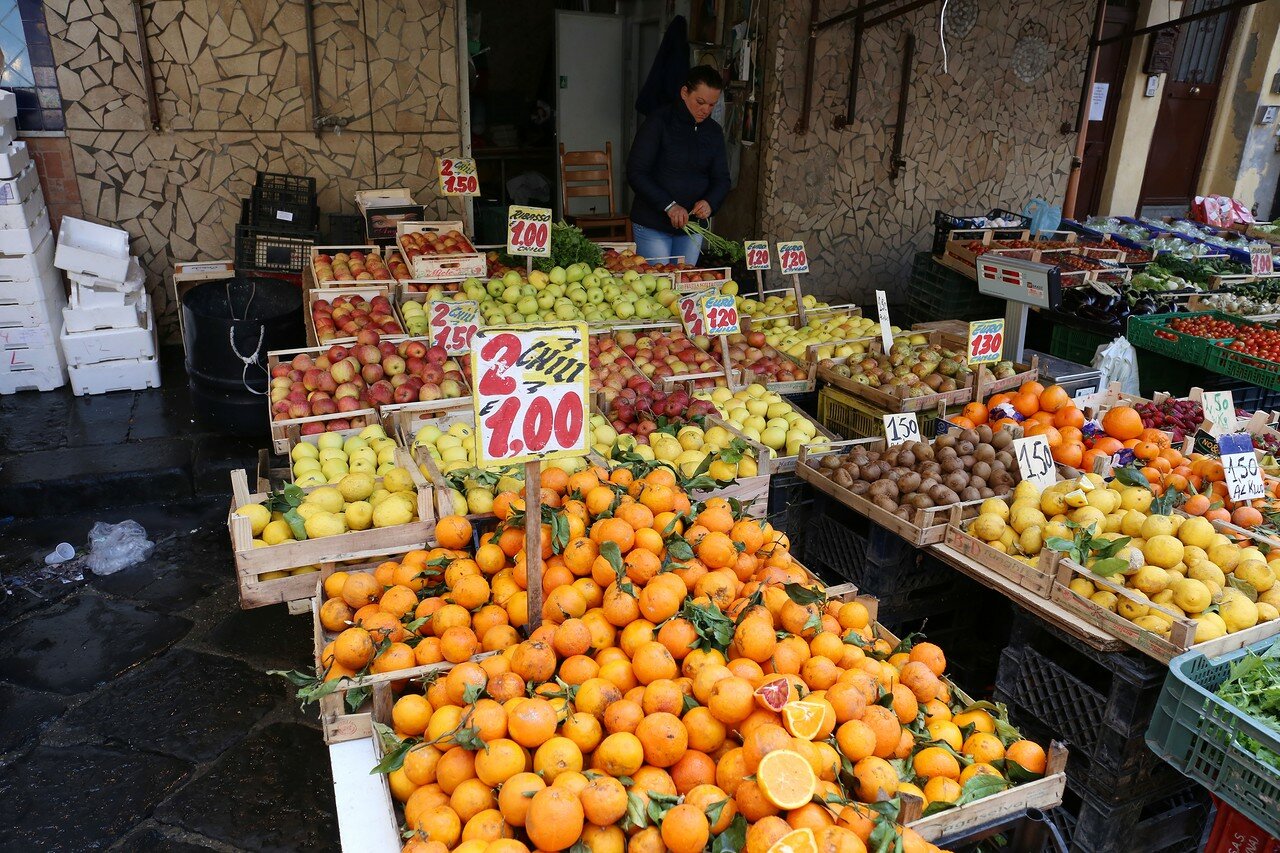 Stalls with seafood are interspersed with consumer goods, which are billed from "stationary" shops. Here you can buy absolutely everything, from tableware to electronics. In one such shop (among the Pakistanis) I finally bought a normal battery for an ancient Nokia for 6 euros, surprisingly, a 2015 release. We have such five-year-old freshness and hopelessly exhausted sell twice as much. 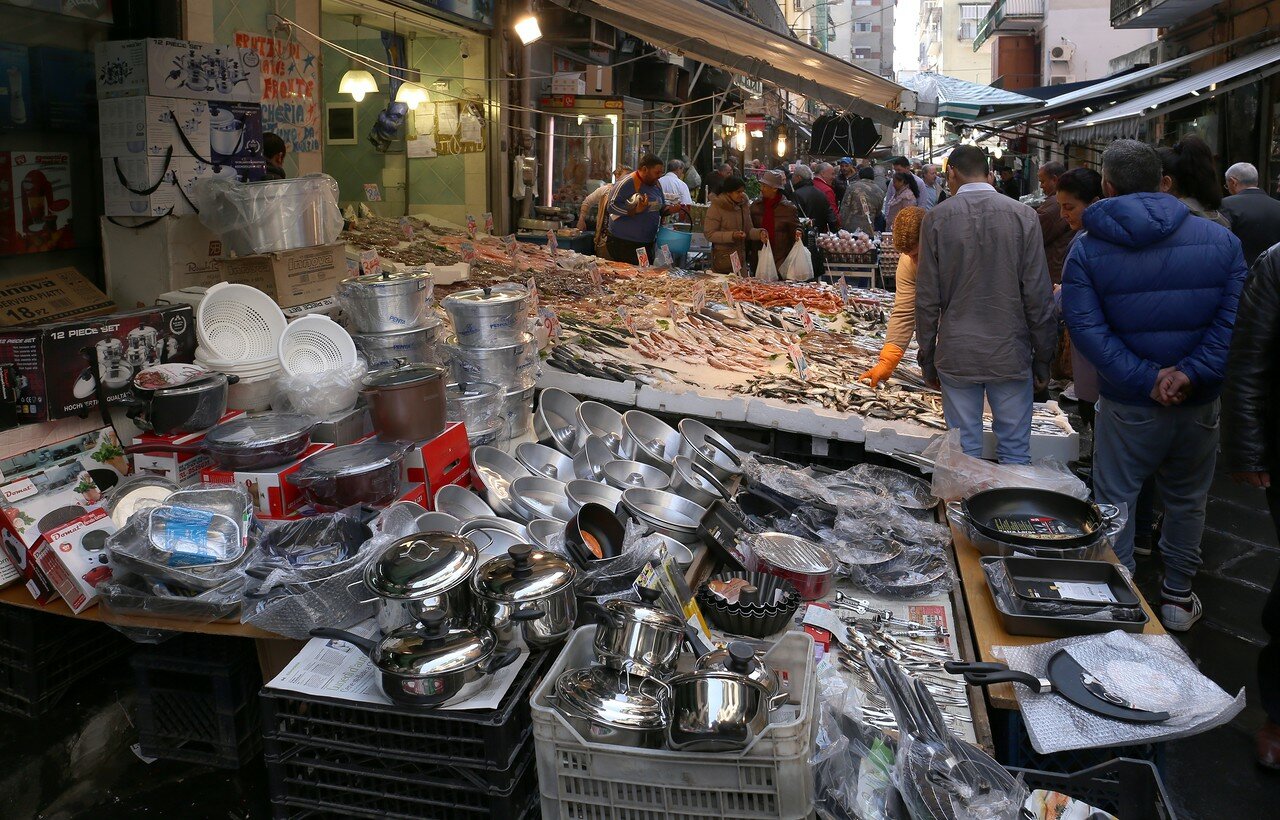 Homemade wine for "L'una Euro", fresh pastries, juices, cookies, chocolate - and all this is cheaper than in an economy class supermarket. One can only wonder how small merchants manage to compete with the networks. There is a brisk trade in "non-branded" cigarettes from stands at 3-3. 50 euros (official prices are twice as high). It looks like tobacco from the Balkans. These trays are quickly installed, the product is quickly laid out, just as quickly disassembled, and the merchant moves to another place. Obvious contraband, so I didn't risk taking pictures of the tobacco mafia. 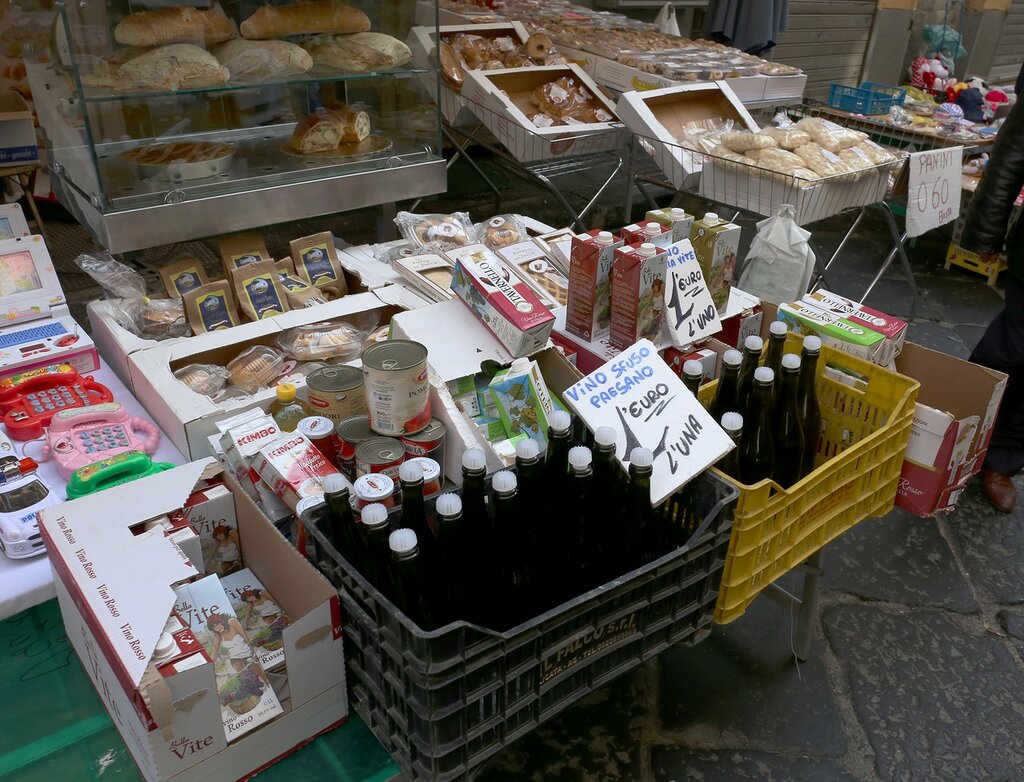 There was a flea market just outside Nolan's gate. 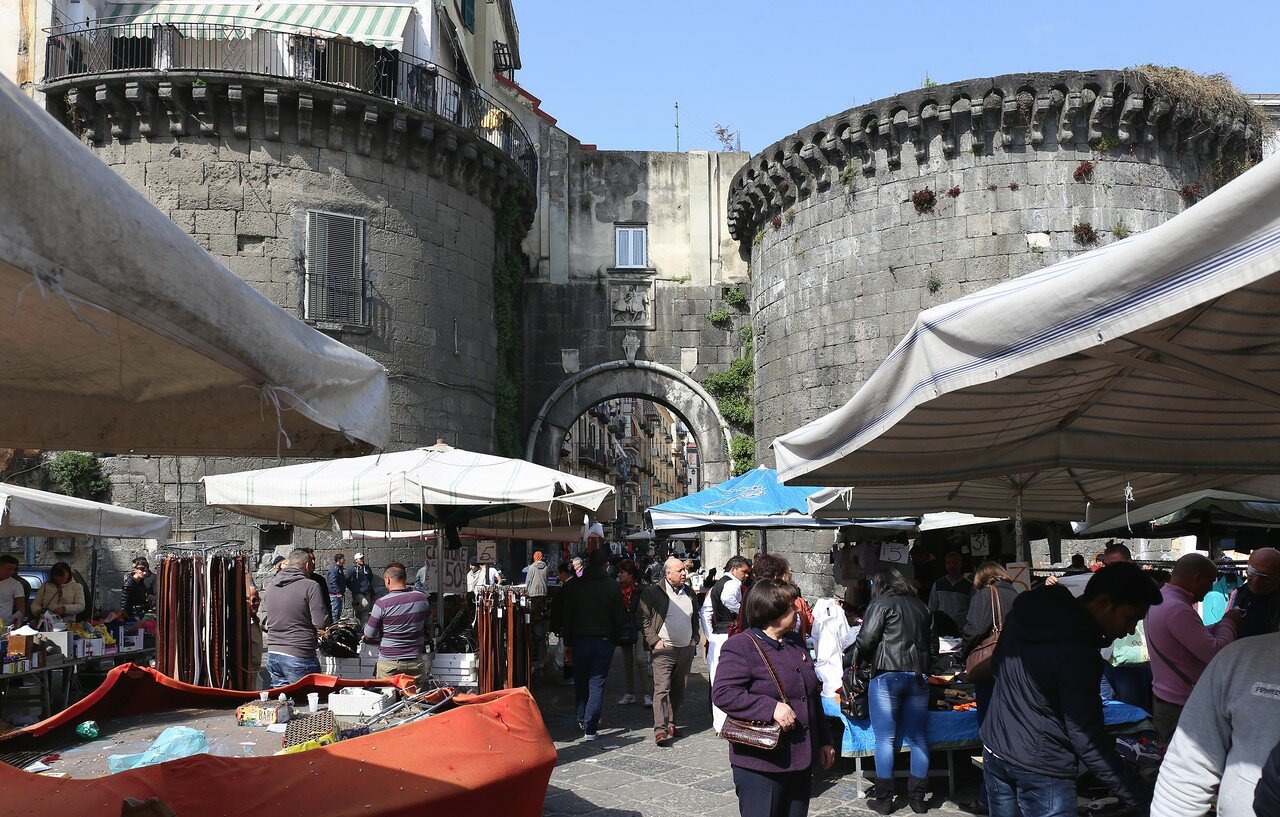 Here you can buy quite decent shoes and clothing at very attractive prices (men's suit, for example, for 20 euros), as well as all sorts of small things of the most extensive assortment. 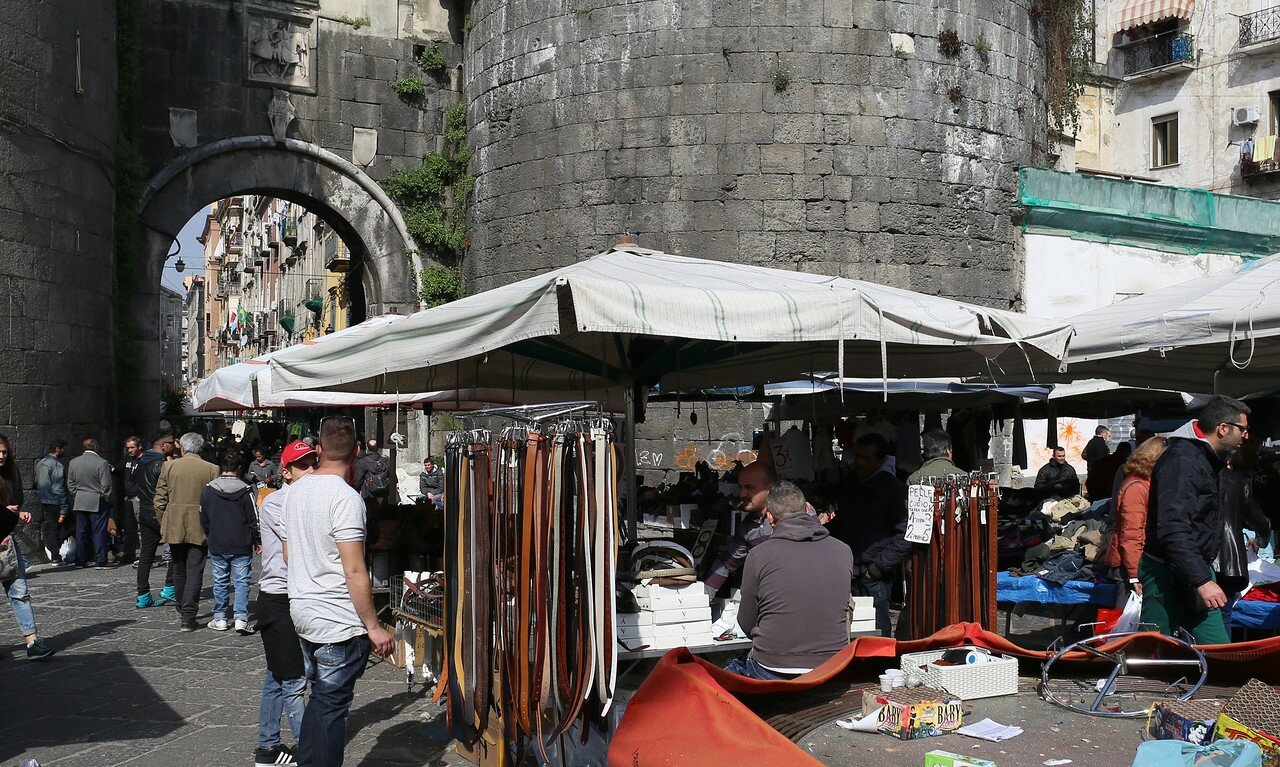 Some things are actually sold for "Uno Euro", and these rubble is eagerly rummaged by people who do not give the impression of beggars. 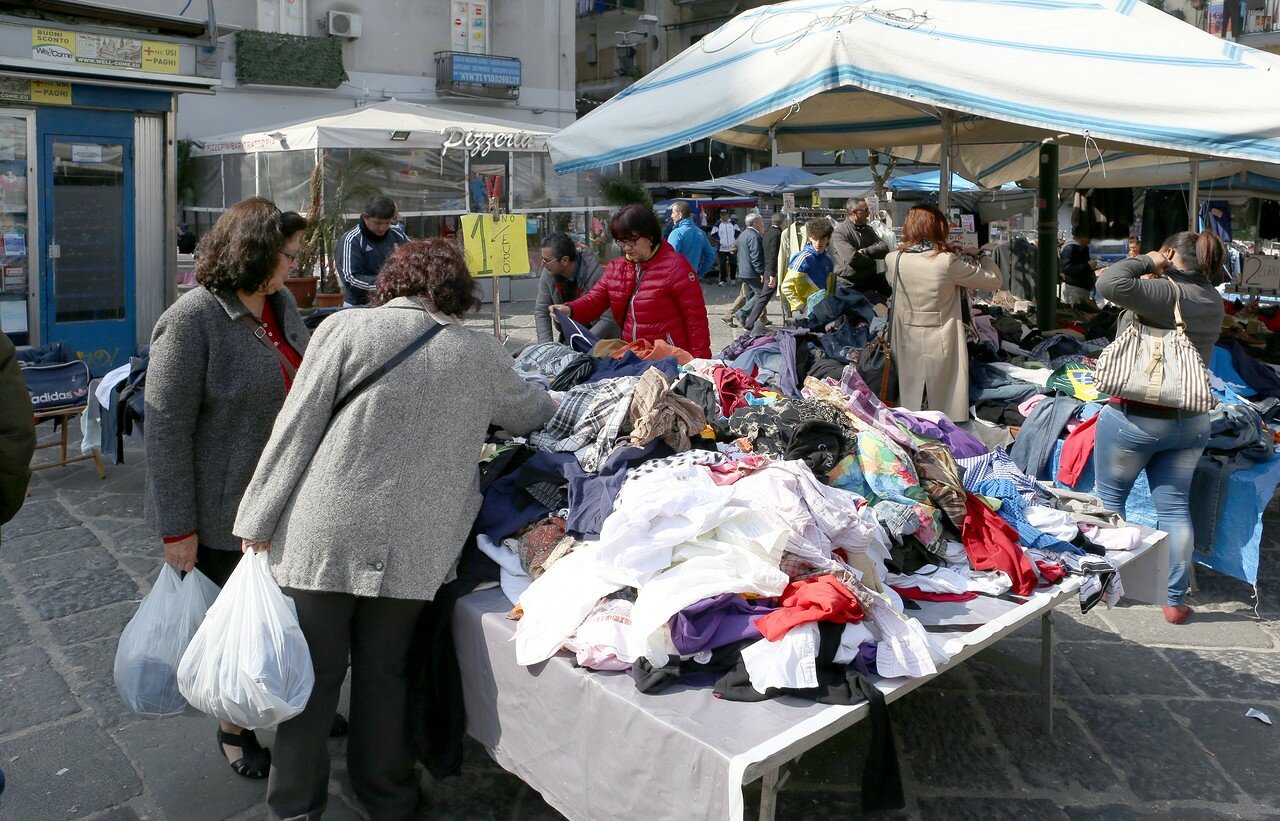 The usual condition of Neapolitan sidewalks near retail outlets. Garbage is strewn in every nook and cranny. At the same time, not surprisingly, the sidewalk itself does not give the impression of being dirty - stone pavements are regularly washed, and such landfills are eliminated every night. It's mostly plastic and paper - wrapped. Well, judging by the greasy leftovers, local homeless people are not in danger of starvation. 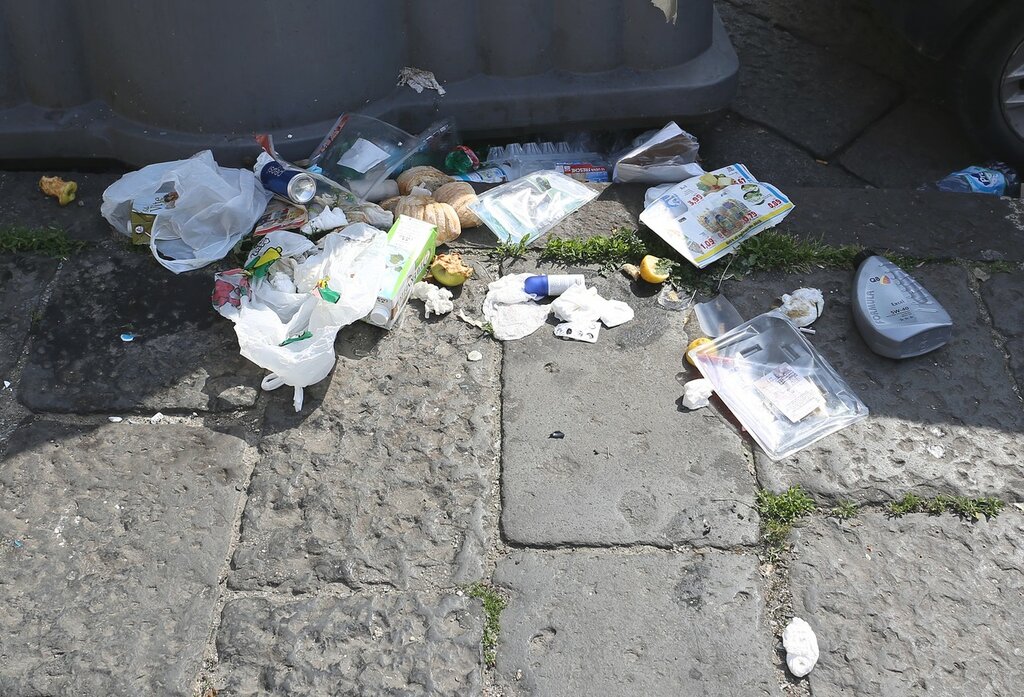 Pepe Guglielmo square (Piazza Pepe Guglielmo on the map), the facade of the Market square district. From the side of the Corso, Garibaldi looks quite presentable. 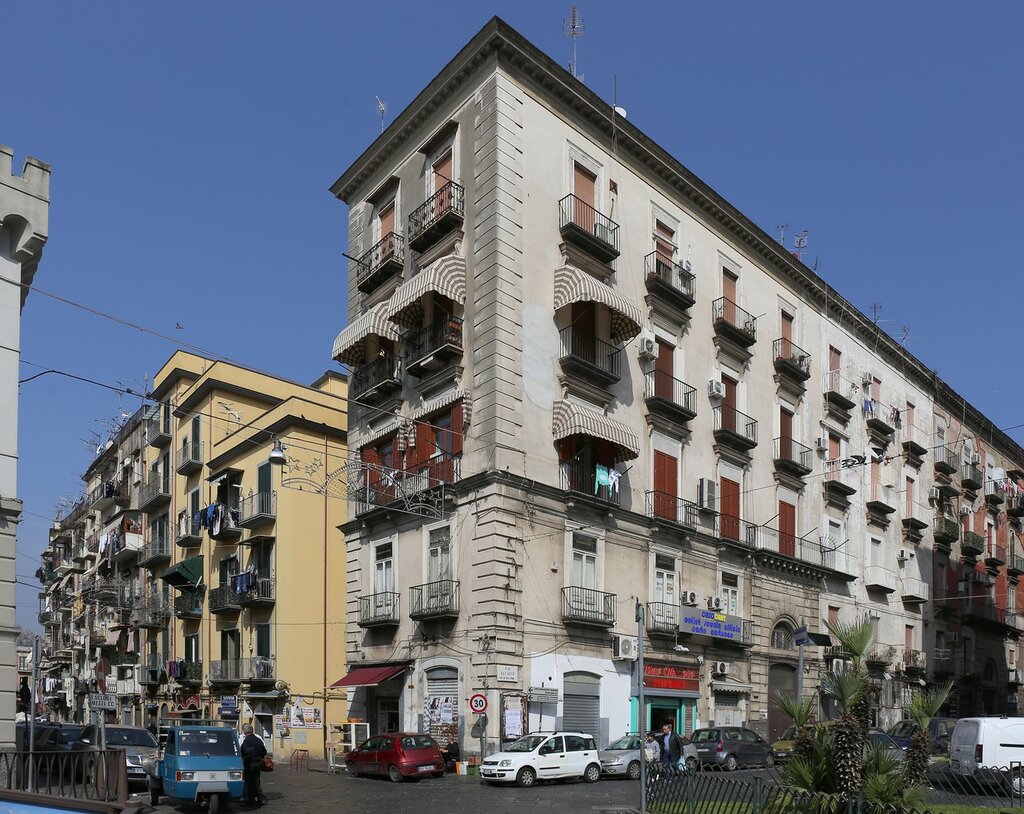 And here is the Market square itself (Piazza Mercato on the map), which has long lost the function defined by its name.

Now local children play soccer here and ride scooters. Although the perimeter of the square is full of shops and shops, all of them are closed on Sunday. 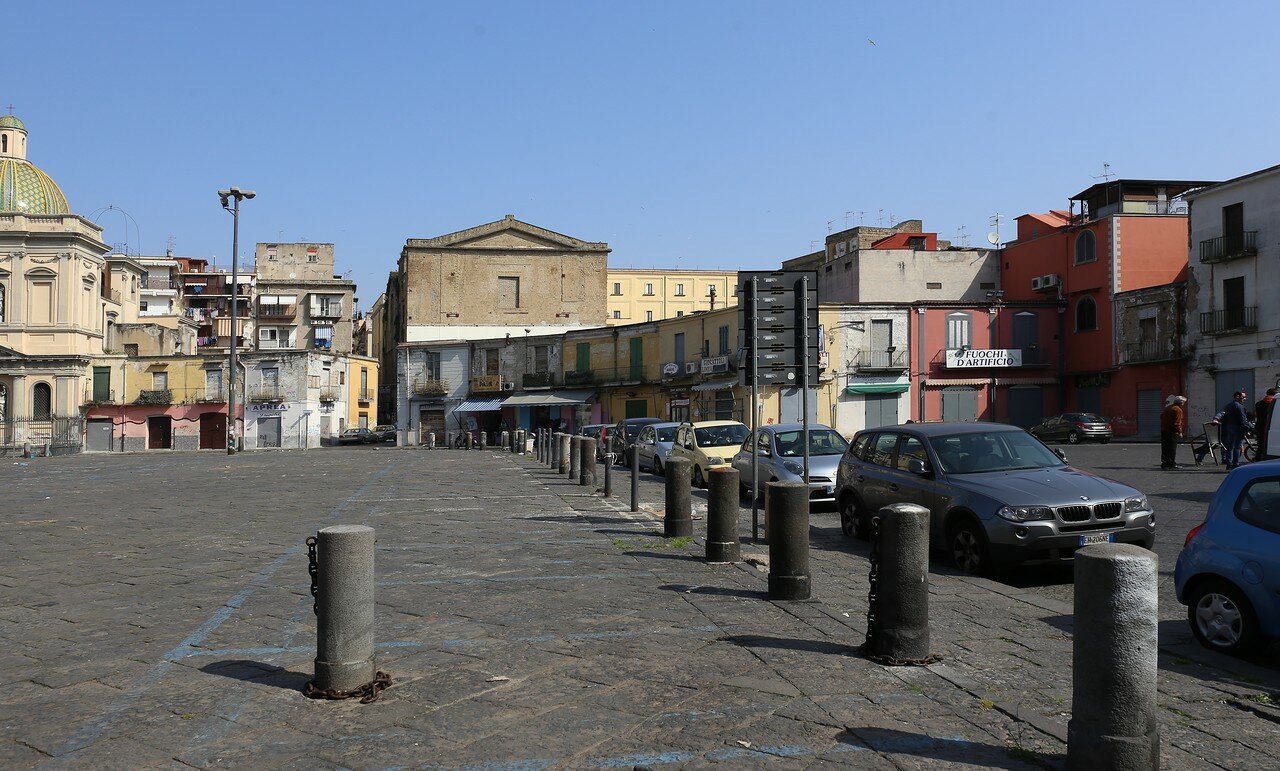 The inner streets of the district are more modest than on Garibaldi, but they are not slums. Some buildings have a run-down look, but the whole area is quite normal, and I walked here calmly late in the evening. Now the streets are decorated with Italian flags on the occasion of the Catholic Easter last week, which is celebrated the week before and the week after. And ahead of us is the day of Liberation from fascism, April 26. 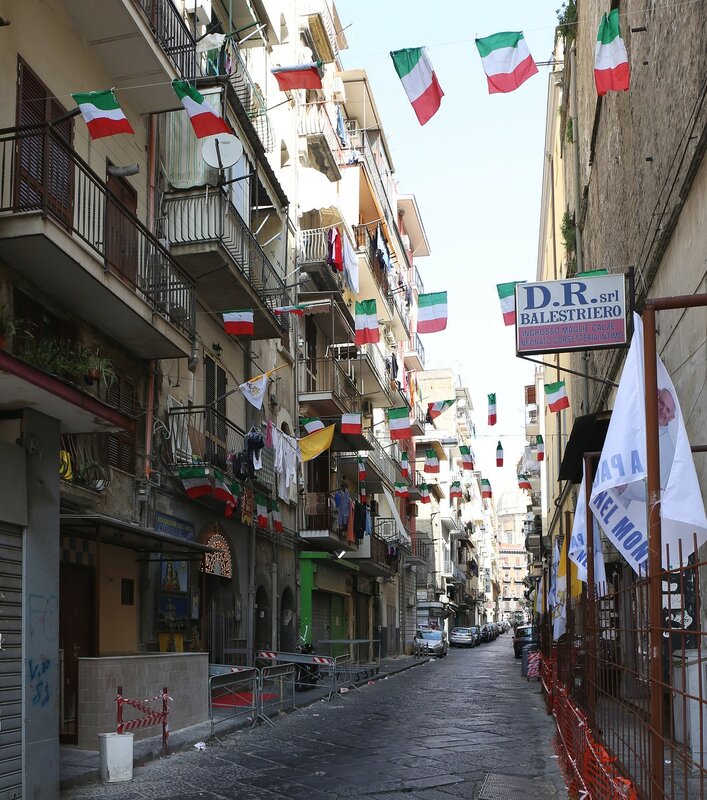 Well, finally I looked at the Church of Santa Maria La Scala (Chiesa di Santa Maria la Scala on the map), founded in the 11th century. I had never been able to look at it after a week of living on the next street, and now I couldn't take pictures of the interesting interiors - the Church was going to Sunday mass and was full of people. Well, let's leave it until the next visit to Naples. 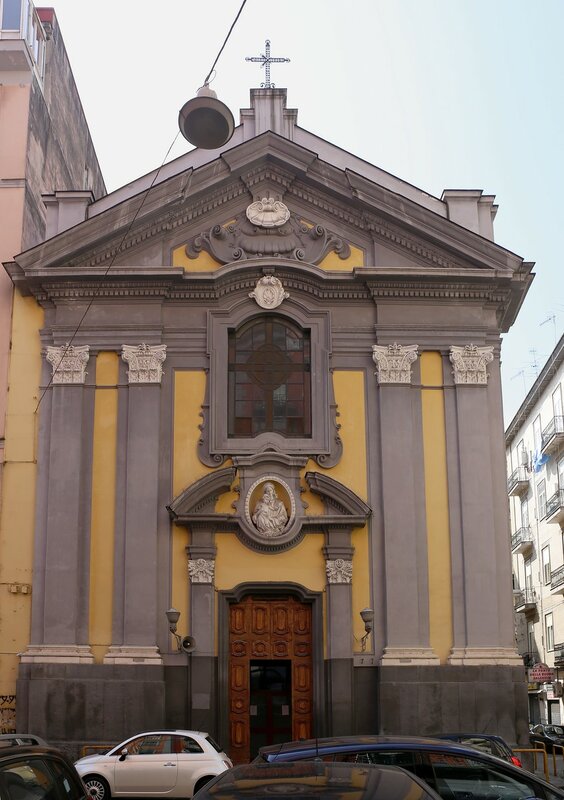